The Baywater Telehealth Application is being used on a trial basis across care homes with residents with Learning Disabilities in Gloucestershire. Telehealth uses electronic equipment and a tablet to collect information about an individual’s health. The information is then shared with people like a GP. The pilot project aims to establish if this already existing technology could be useful to:

The project started in 2019, but was put on hold at the beginning of 2020 due to COVID. The initial phase involving seven homes was then scaled up, with funding from NHSX, with a further 11 homes joining the study. The West of England Academic Health Science Network also provided full-time project support.

The film below tells the story of the project, and outlines many of the initial benefits.

For me the main purpose of the project is to work with staff in learning disability settings to understand what an individual’s unique wellness is, and to understand when to escalate their concerns, when they see changes.

What the project did:

Supporting care homes through the project has involved far more than just providing access to the Telehealth application. A first step was establishing the existing levels of knowledge and confidence amongst staff and then developing a training package, delivered by the West of England AHSN, to support them in taking observations. This gave them the skills to use the RESTORE2 tool to spot the early warning signs of residents becoming unwell. 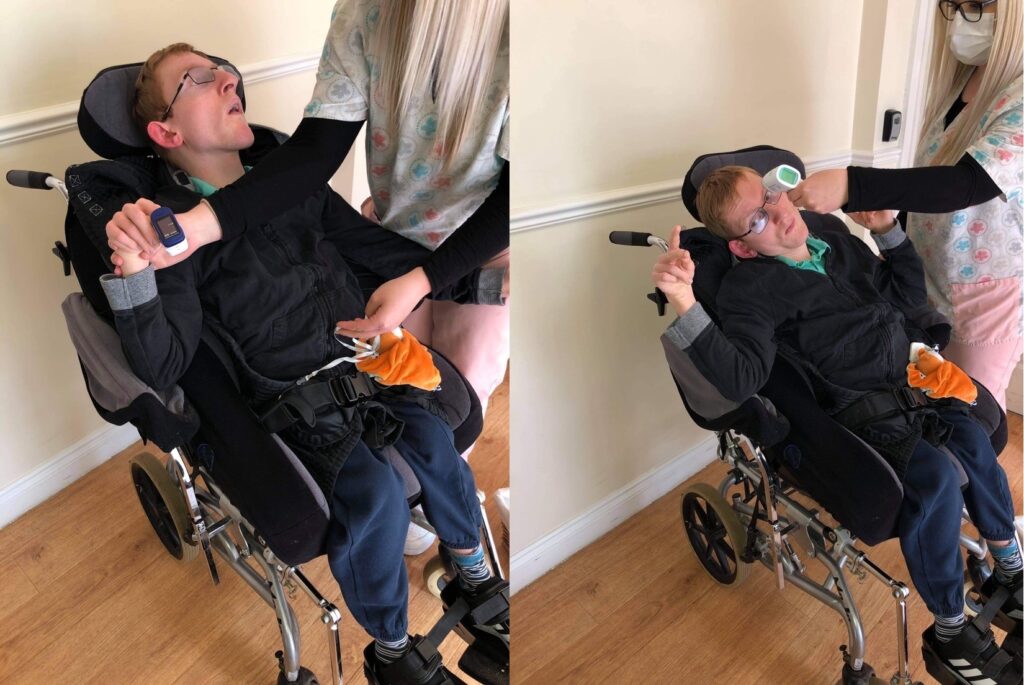 The team then obtained to update the Telehealth questionnaire to include RESTORE2 observations and help staff use soft signs to build residents’ ‘unique wellness’ profile.

“A 44 year man with learning disabilities was admitted for routine operation. As he was part of the Telehealth project his baseline data had been recorded and showed fairly low blood pressure and a consistently low temperature of below 35 degrees. After the operation, his body temperature did rise within ‘normal limits’, but it was reported that he was fine in himself.

Some weeks later, whilst dressing a wound from the operation, staff identified his temperature had gone risen to 37.2 (which was very high for him), his pulse rate also went up to over 100. Entering this data into the Telehealth platform prompted the question ‘did he look better or worse than the previous day’ – the response was ‘worse’. The man was also able to say that he felt worse than he had done previously.

The staff escalated their concerns to the manager, whose instructions were to contact the hospital if anything out of the norm. The hospital arranged for him to be admitted. The ambulance arrived to take him to hospital and the manager printed off the man’s Telehealth results to take with him. The man had early onset of sepsis and was treated immediately with IV antibiotics appropriately. The man has since recovered and returned to the home.

The manager stated that using the telehealth equipment had definitely helped him and the staff to identify the man’s deterioration and as a result they acted upon it promptly.”

As Gloucestershire CCG’s GP Lead for Learning Disabilities I am very enthusiastic about this project. It is demonstrating that effective use of remote monitoring supports personalised care for people with a Learning Disability in care home settings. There is evidence that observations such as blood pressure and temperature, vary greatly in people with a Learning Disability, and recording baseline observations is a good indicator of their ‘unique wellness’ so illness can be better identified and managed early. This telehealth technology allows GPs and Nurse Practitioners within surgeries to review patient results in real time, helping to support patient-centred clinical decisions and relationship building with all parties involved in the care of that individual patient.’

The training has been delivered to over 40 care home staff, with over 100 residents now being monitored using the Telehealth application.

Full evaluation will be completed at the end of the project but initial general findings include:

Results from two of the homes in the initial phase of the pilot are showing a cost saving of nearly £33,000, even after the costs of the supplying the equipment have been factored in.

Another outcome of the project has been that many residents have become more familiar and comfortable with equipment used to carry out observations. This will contribute significantly to ease of carrying out annual health checks. Annual health checks are important to maintaining the health of people with learning disabilities, but completion rates can be low, partly due to the difficulty of obtaining observations.

“The follow-up survey has shown a clear improving in the confidence and ability our staff in using observation tools and identifying deterioration. Also, In one of our homes the local GP has also signed up to the trial and can access the same data we record, so that enables him to be able to diagnose more accurately and quickly.”