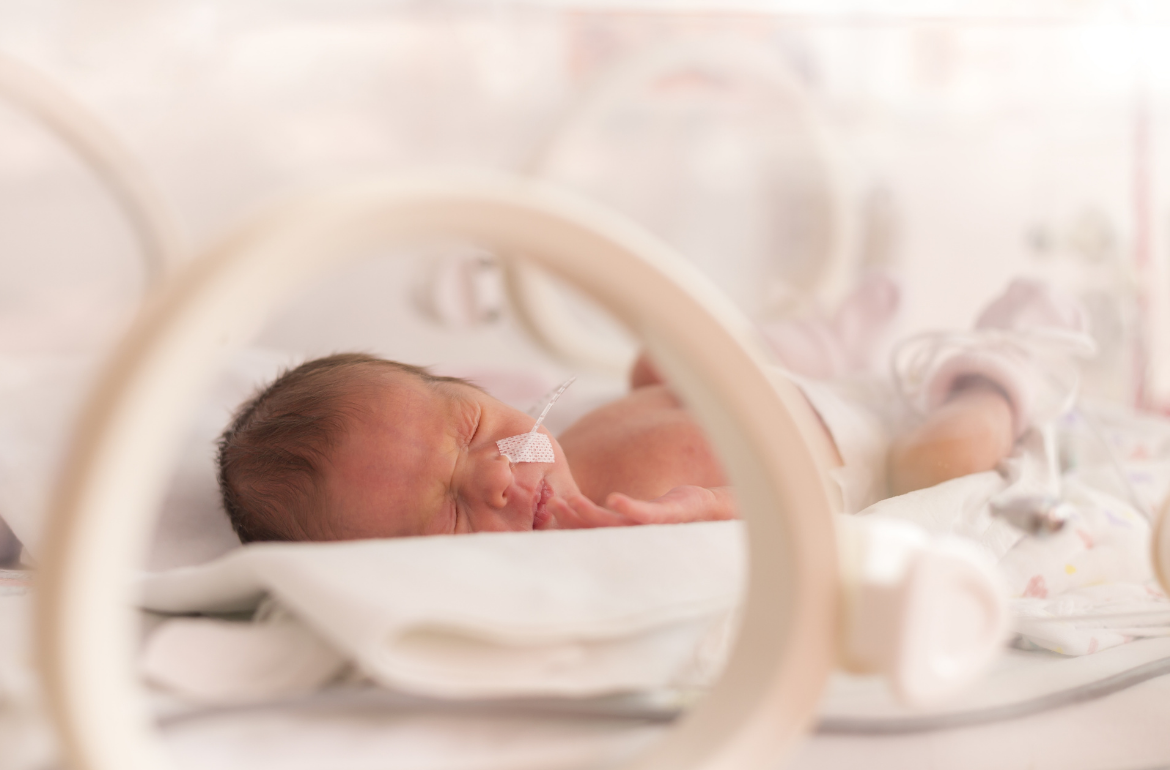 Launched in April 2020, PERIPrem (Perinatal Excellence to Reduce Injury in Premature Birth) is a unique perinatal care bundle that aims to improve the outcomes for premature babies across the West and South West regions. As of December 2021, 1,094 babies have been cared for using our PERIPrem bundle.

This reflects the NHS Long Term Plan ambition to reduce stillbirths, maternal and neonatal mortality and serious brain injury by 50% by 2025, with an increased focus on pre-term mortality.

The bundle, which now forms part of the AHSN’s Maternity and Neonatal Safety Improvement Programme, consists of a number of interventions that demonstrate a significant impact on brain injury and mortality rates amongst babies born earlier than 34 weeks.

“I truly believe that this package saved my boys’ lives, and without it I’m not quite sure where we’d be now. But because of PERIPrem I have two (17-week-old) beautiful little boys who are just starting to smile, and that is down to PERIPrem.”

PERIPrem created a community of clinicians, dedicated to transforming the delivery of care for mothers and preterm babies. The project achieved life changing, sustainable improvements to the way the most vulnerable babies are cared for and accelerated perinatal working culture and innovation. The project embedded quality improvement methodology and coaching in units alongside an emphasis on building strong and effective teams.

The care bundle was developed through a collaboration between the West of England  and South West Academic Health Science Networks. In partnership with the South West Neonatal Network, every maternity and neonatal unit in the region has been involved, along with parent groups, to co-design, produce and test the care bundle.

Watch our introduction to PERIPrem animation.

Preterm birth is the main cause of neonatal mortality and morbidity in the UK, survival rates are improving in preterm babies; but rates of severe disability have not followed the same trajectory and there is a growing population of children with neuro-disabilities due to prematurity.

The NHS Long Term Plan (2019) has committed to realising a 50% reduction in stillbirth, maternal mortality, neonatal mortality and serious brain injury by 2025, with an increased focus on pre-term mortality. PERIPrem directly contributes to this ambition, as well as those of the national NHS Maternity and Neonatal Safety Improvement Programme.

“Perinatal services across the South West have worked with great passion to implement the PERIPRrem Project in order to support improved outcomes and experiences for infants and families who journey through neonatal services. We are so proud to be part of a team of such dedicated, caring professionals.”

PERIPrem is an evidence-based bundle of perinatal interventions that contribute to a reduction in brain injury and neonatal mortality across the South West of England.

The PERIPrem bundle was co-created by clinicians, maternity and neonatal teams and parents. The interventions range from ensuring that mums give birth in the right place, to offering mothers magnesium sulphate, which has been shown to reduce the risk of the baby developing cerebral palsy later in life, and optimal cord clamping.

Quality Improvement (QI) methodology was at the heart of implementation alongside coaching and forging new ways of working, where clinicians from obstetrics, midwifery and neonatal, join together to drive forward and revolutionise care for pre term babies.

To enable units to focus on increasing rates of PERIPrem interventions the AHSNs provided funding to each trust to backfill two PERIPrem Leads, one neonatal nurse and one midwifery lead. In addition, units were encouraged to identify PERIPrem Champions to act as advocates for selected bundle interventions, with a focus on obstetrician and neonatologists.

The PERIPrem Steering Group developed a toolkit, adapted from the PReCePT project, of resources and materials for each element of the bundle. Units were encouraged to use and adapt these to meet their needs. PERIPrem clinical and parent passports were also created to offer advice and reassurance to families and many resources were made available in multiple languages. The PERIPrem team also ran virtual share and learn sessions and sent weekly newsletters to distribute resources, connect disparate teams kept apart by the COVID pandemic and celebrate success.

PERIPrem created a community of clinicians, dedicated to transforming the delivery of care for mothers and preterm babies. The project achieved life changing, sustainable improvements to the way the most vulnerable babies are cared for and accelerated perinatal working culture and innovation. As of December 2021, 1,094 babies have been cared for using our PERIPrem bundle.

In April 2022, PERIPrem featured as a case study in the latest NHS GIRFT Neonatology report with teams also being encouraged to access our resources (see pages 10 and 66).

In April 2022, a pre-print study was published focusing on the Barriers and Enablers to the Implementation of a Perinatal Care Bundle: The Perinatal Excellence to Reduce Injury in Premature Birth (PERIPrem) Project.

As measured by the National Neonatal Audit Programme’s (NNAP) latest report, units across the South West achieved, in 2020, on average, the:

“Through PERIPrem, we have created what we believe to be the UK’s largest perinatal QI clinical collaborative. It brings together colleagues from all 12 maternity trusts across the South West region, along with teams from the two AHSNs and the Neonatal Network, clinical experts and parent partners, and we continue to drive perinatal improvement using a common language and streamlining processes. In addition to saving the lives of the most vulnerable babies, PERIPrem is improving the chances of disability-free lives and is nurturing high-functioning perinatal teams.”

PERIPrem is the local delivery vehicle for the optimisation and stabilisation element of the Maternal and Neonatal Safety Improvement Programme (known as MatNeoSIP).

An independent evaluation of PERIPrem has been completed and we expect to publish the findings in summer 2022.

Find out more about PERIPrem.