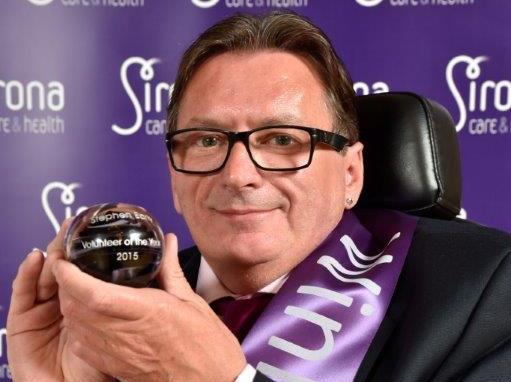 Stephen Early is a service user and volunteer with Sirona who has been actively involved in the development of this training programme, from designing scenarios to reflect realistic situations that staff might encounter to giving talks at staff inductions.

Stephen is a service user living in one of our Extra Care Services, and currently is a volunteer with Sirona Care & Health and sits on the service user panel/forum.

I met Stephen just over a year ago when I approached members of the panel about working with me to provide a service user’s perspective for the Sirona support worker induction on what it is like to receive a service.

Once Stephen started it became quickly apparent that he was a “natural” talking with people and able to get his message across about how important communication and human factors are when supporting people. Stephen is able to bring the scenarios alive for the audience, has made people laugh and at times brought people to tears.

Stephen is a very inspirational person and has touched the lives of many. The feedback we receive after each induction is really very positive…

It really shows the great value that service users can make to organisations and how they can help to shape future services.

Unfortunately I’ve caught pneumonia about six or seven times, and on about four or five occasions I’ve been took into hospital…

… because I was living by myself I’ve had problems with eating for about six years.

… one of the things they do here is try and make me eat and drink so they make me a sandwich now and then, or every time they come in, no matter what they’re going to do they always make me a cup of tea and put it in front of me, and I feel if they’ve made me a cup of tea, then I should drink it, even thought I don’t feel thirsty if that makes sense, and when I go up to Karen’s they the same, everyone does the same. “Tea Steve!” and it’s great.

So one day the doorbell went and the lady came in and she was a support worker. I think she was, I’m not sure now. She came in and said [grunting] “Alright.”

Well, straight away you know that you were not going to have a conversation with this lady about anything and the worst thing is that these sort of five, ten minutes ones which you might get spread out between the day, maybe three times, maybe four, not sure, all depends on what your needs are, are very important to everyone because it’s communication. It’s talking to someone.

And loneliness in these sort of places is quite bad actually because you know it has an effect on them and on their health as well. Because if you’re feeling down, you’re more likely I feel to get things wrong with you and depressed and things like that, so it’s quite important when people come in that they’re a bit… and say things. So when she came in I knew straight away I wasn’t going to have a conversation with her.

Now if I was feeling a bit unwell or anything like that, or had troubles or things, I wouldn’t have talked to her about it because I knew she wasn’t in the right mood to receive any sort of information. And then she came and said, “Got to make you a drink.” Now “got to”, so that hit me home that “got to” is not “Oh, I’m going to make you a…”, “Got to make you a drink. Can’t understand why you can’t do it yourself.” That was a little whisper underneath the voice.

And then the sandwiches… “What do you want in your sandwiches?” I said, “Well anything please” and then again I heard her say, “Can’t understand why you can’t do it yourself” and then she left. And as soon as she left I got up and I chucked the tea down the sink, and I put her sandwiches in the bin because I wasn’t going to eat or drink anything from someone who didn’t’ want to do anything for me and it made me feel really bad.

So that went on for about six or seven weeks. I stopped taking food, and when they did make me food I just tipped in the bin, and the drinks, because I felt like no one wanted to do it and they didn’t understand me. They didn’t’ understand my problems. They just thought I was lazy. So it didn’t matter if they came in happy or joyful, I would still do it. That was quite a bad experience.

And then a good experience was one lady come to see me, well lots of them. And they come in and ring the bell [brightly] “Hi Steve!” Straight away you know you’re going to have a positive talk to that person and positive reaction. And you’re going to say to that person if there is something troubling you, you’re going to mention it to them, you know, “Oh I don’t feel too good today… Oh I’ve got this problem” or whatever.

And the other thing is they come in and say, “What have you been up to today? What’s been going on? What are you going to do this afternoon?” All them little things, you know, it helps the conversation to go through and it is brilliant. “Oh,” she said, “Is it two sugars, Steve, innit? It’s two innit?” Them little things, it’s not like “Oh, I gotta make you a cup of tea” or anything like that. It’s “I’m going to put in two sugars.” Some don’t even talk about it they just do it and bring it out and put on the table which is brilliant so it’s them sort of things…

…unfortunately the people, some of the residents we have here, I call them my family because they are they’re all my family, and I tell them that. Anyway, they’ve got problems some of them and some of them suffer with memory loss, Alzheimer’s, so they’re not able and some of them can’t speak properly and they cannot relay to the support workers what it means, what they mean to us and they mean everything.

I call all of my support workers “my ladies” because that’s what they are. They’re my ladies. And they’re here… if it wasn’t for them I wouldn’t be here, they mean so much. Doesn’t matter if they come in and make me a cup of tea or just the simplest of things like help me taking off my shoes. My legs swell up around about half past two in the afternoon. They come in and take my shoes off and they always make me a cup of tea when they do it, and they have a little chat whilst they do it, and it means so much.

And I’m able when I go on my induction days to translate to them what they actually mean to people like me and the rest of the residents what they’re doing. Their job’s just as much important as a doctor or anyone like that because they’re doing something to help and they’re not only helping in the sense of doing something like giving someone tablets at the right time or doing some domestic or whatever or making sure someone eats. They’re actually talking to that person, which is fantastic, which makes them feel good.

… if I can hit that one person at induction day and she stays doing caring for maybe ten years? So she might see thousands and thousands of people on her journey through her career. If she carries that through, with all of them, what a magnificent difference that’s going to make! So that’s how I think of it.

Stephen was the winner of Sirona Volunteer of the Year 2015 for his work on the project: