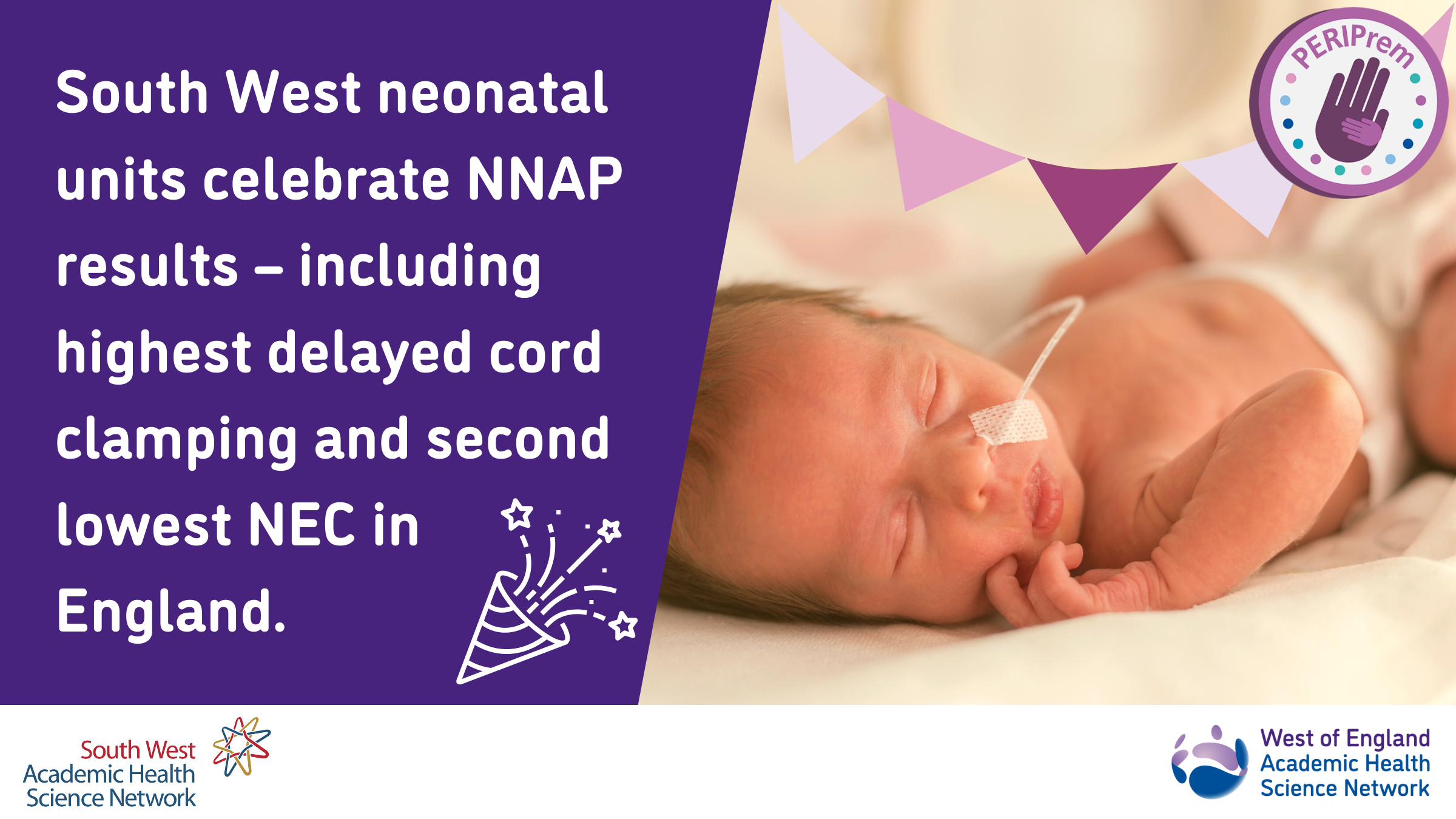 Maternity and neonatal (MatNeo) units across the South West are celebrating achieving the highest delayed cord clamping rates in 2020 in England, as measured by the National Neonatal Audit Programme (NNAP). On average, units across the South West also achieved the third lowest rates of mortality to discharge, the second lowest rates of necrotising enterocolitis, alongside the fourth highest administration levels of magnesium sulphate (MgSO4) across England.

The NNAP assesses whether babies admitted to neonatal units in England, Scotland and Wales receive consistent high-quality care, and identify areas for quality improvement. The NNAP’s most recent audit shows delayed cord clamping was at its highest level in units in the South West. More than a 20% difference was illustrated between South West units (at 60.6%) and the second highest performing region (39%). Evidence shows that avoiding immediate cord clamping reduces death in preterm babies by nearly a third.

These results follow intensive activity across the region to drive adoption and spread of a range of neonatal interventions, including delayed cord clamping and MgSO4, through a unique care bundle known as PERIPrem (Perinatal Excellence to Reduce Injury in Premature Birth).

Launched in April 2020, PERIPrem is a perinatal bundle designed to improve the outcomes for babies born before 34 weeks. The West of England Academic Health Science Network (AHSN) is delivering PERIPrem in partnership with South West AHSN and South West Neonatal Network. The bundle consists of eleven interventions that demonstrate a significant impact on brain injury and mortality rates amongst babies born prematurely.

The bundle was the first of its kind, and co-created by clinicians, MatNeo teams and parents. Since April 2021 PERIPrem has continued to be delivered across the region as part of the NHS Improvement Maternal and Neonatal Safety Improvement Programme. A number of NHS Trusts across England are now implementing care bundles based on the PERIPrem model.

By providing frequent share and learns, 360 simulation videos, toolkits and quality improvement coaching to facilitate the spread of knowledge and best practice, PERIPrem increased confidence in delayed cord clamping. This incudes when babies are extremely premature, require resuscitation at delivery or are part of a twin delivery. Free cord clamping resources can be accessed on the PERIPrem webpages.

The NNAP explains that necrotising enterocolitis (NEC) “is a devastating illness which can follow preterm birth. Bowel inflammation prevents milk feeding and surgery may be needed. Babies who develop NEC typically stay in hospital for a long time. Rates of mortality in babies with NEC are high, at over 20%. Babies who survive NEC can have developmental as well as long-term feeding and bowel problems”. Units in the South West achieved the second lowest levels of NEC (at 4.7%) in England. Rates of NEC are directly influenced by two PERIPrem bundle elements: probiotics and early breast milk.

Building on the progress made nationally through the AHSN Network PReCePT programme (which was developed in the West of England region), the administration of MgSO4 remained a core intervention of the PERIPrem care bundle.  The administration of MgSO4 to all eligible women in England during preterm labour (less than 30 weeks) reduces the incidence of cerebral palsy. Magnesium sulphate costs from just £1 per dose. Free MgSO4 resources can be accessed on the PERIPrem website.

The focus across a broad range of interventions known to reduce mortality led to the region achieving the third lowest rate of pre-term mortality to discharge home in England (at 5.6%).

Natasha Swinscoe, Chief Executive of the West of England AHSN and Patient Safety Lead for the AHSN Network said:

“To December 2021 over 1090 babies have benefited from the PERIPrem bundle. It is a testament to the hard work of all South West MatNeo staff, and everyone who contributed to our PERIPrem project, that the South West region has the highest levels of delayed cord clamping alongside multiple other positive results which crucially include the third lowest level of pre-term mortality in England.

Launching PERIPrem during a pandemic, and at a time of extreme pressure on the NHS, wasn’t easy but these results illustrate the dedication and enthusiasm to improve the safety and life chances of the most vulnerable babies and their mothers”.

“Working as part of the PERIPrem team has been an inspiring experience. The results of the NNAP illustrate the impact the bundle is having – it’s particularly striking to see average delayed cord clamping rates in our units at least 21% higher than in other regions. In all my years looking at similar data I don’t think I’ve ever seen such a wide range.

Knowing that PERIPrem has longevity locally and is now being adopted in other parts of England, illustrates the potential it has to change the lives of pre-term babies – that is something everyone who contributed to the project can be very proud of”.

The full NNAP report and data can be accessed here.

Find out more about PERIPrem (Perinatal Excellence to Reduce Injury in Premature Birth), and download resources, to improve the outcomes for premature babies.

Find out about our work across the West of England to improve maternal and neonatal patient safety.