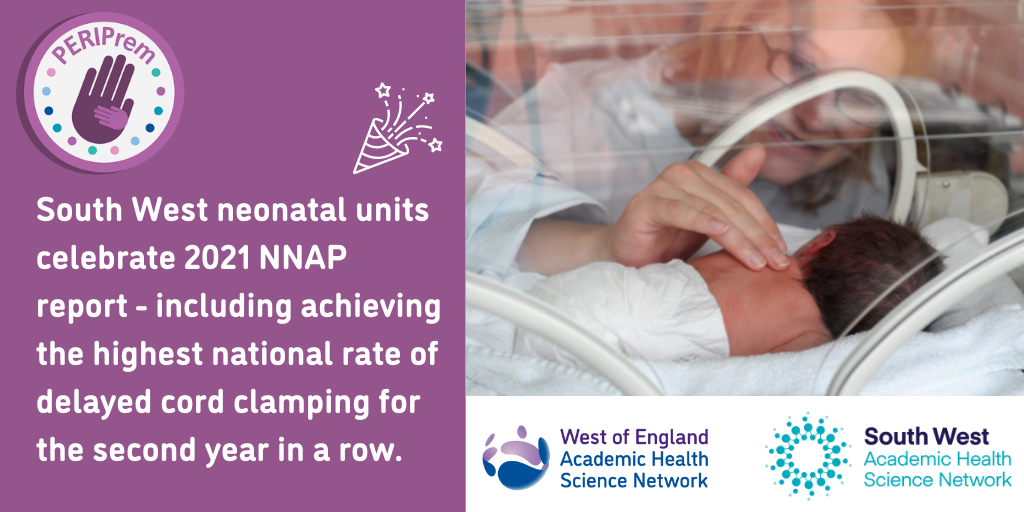 Maternity and neonatal (MatNeo) units across the South West are celebrating achieving the highest rate of delayed cord clamping in England and Wales for the second year in a row, as measured by the 2021 National Neonatal Audit Programme (NNAP).

Rates of parental presence at one or more consultant rounds (for admissions lasting more than 24 hours) were also at their highest across England and Wales in the South West (at 91.4% against an England average of 85.8%).

The NNAP assesses whether babies admitted to neonatal units in England, Scotland and Wales receive consistent high-quality care, and identify areas for quality improvement. The NNAP’s 2021 audit shows delayed cord clamping (DCC) was at its highest level in units in the South West at 68.1% – against a national average of 43%. Five of the top 20 DCC performing units were from the South West. Evidence shows that DCC reduces death in preterm babies by nearly a third.

These results follow intensive activity across the region to drive adoption and spread of a range of perinatal interventions through a unique care bundle known as PERIPrem (Perinatal Excellence to Reduce Injury in Premature Birth).

Launched in April 2020, PERIPrem is a perinatal bundle designed to improve the outcomes for babies born before 34 weeks. The West of England Academic Health Science Network (AHSN) is delivering PERIPrem in partnership with South West AHSN and South West Neonatal Network. The bundle consists of eleven interventions that demonstrate a significant impact on brain injury and mortality rates amongst babies born prematurely.

The bundle was the first of its kind, and co-created by clinicians, MatNeo teams and parents. Since April 2021 PERIPrem has continued to be delivered across the region as part of the Maternal and Neonatal Safety Improvement Programme (MatNeoSIP). A number of NHS Trusts across England are now implementing care bundles based on the PERIPrem model with the project’s Clinical Leads frequently attending conferences and panels to share local learning nationally.

In August 2022, an independent evaluation conducted by South West AHSN was published in the British Medical Journal Open Quality. It indicated 26% more mothers and babies born prematurely across the South West of England received the care interventions they were eligible for between July 2020 and June 2021, compared to before PERIPrem started. Explore a summary graphic of the PERIPrem evaluation.

The NNAP explains that necrotising enterocolitis (NEC) “is a devastating illness which can follow preterm birth. Bowel inflammation prevents milk feeding and surgery may be needed. Babies who develop NEC typically stay in hospital for a long time. Rates of mortality in babies with NEC are high, at over 20%. Babies who survive NEC can have developmental as well as long-term feeding and bowel problems”. Rates of NEC (at its second lowest rate nationally in the South West) are directly influenced by uptake of two PERIPrem bundle elements: probiotics and maternal early breast milk.

Despite the challenges of the pandemic, geographic spread and staffing, with continuous improvement as a core driver of the PERIPrem programme, the proportion of births below 27 weeks gestation in a centre with a Neonatal Intensive Care Unit (NICU) across the South West have steadily improved each year since 2019. This indicator, known as Place of Birth, is a key focus of the MatNeoSIP.

“The continued success of PERIPrem is something we can be very proud of – including achieving the highest rate of delayed cord clamping nationally for the second year in a row. Whilst the 2021 NNAP report illustrates the dedication and enthusiasm across the South West to improve the safety and life chances of babies and their mothers, we know there is more to do – we are always seeking to continuously improve and won’t stop until every premature baby receives every intervention for which they are eligible”.

“In 2017-2018 the South West had the second highest brain injury rate in England. This was a key motivator in developing PERIPrem, alongside broader regional improvement work to try and reduce severe grade Intraventricular Haemorrhage (IVH). Thanks to this shared vision and focus on creating sustainable teams, rates of severe IVH or death in the South West now rank the second lowest in England.”

“The improvements seen across the South West in metrics such as deferred cord clamping and early maternal breast milk are reflective of true perinatal team working, sharing responsibility for achieving the best outcomes for preterm babies.  It is also highlights the impact of supporting and investing in the teams in every single unit across our region, in our SCUs, LNUs and NICUs”.

In April 2022, PERIPrem featured as a case study in the latest NHS GIRFT Neonatology report with teams being encouraged to access our resources. PERIPrem case studies were also published by NHS Confederation (April 2022) and the National Child Mortality Database thematic report (August 2022), as well as this official PERIPrem resources have received Neonatal Nurses Association endorsement.

Access the summary 2021 NNAP report and summary of data.

Find out more about PERIPrem (Perinatal Excellence to Reduce Injury in Premature Birth), and download resources, to improve the outcomes for premature babies.

Find out about our work across the West of England to improve maternal and neonatal patient safety.