PReCePT goes from strength to strength 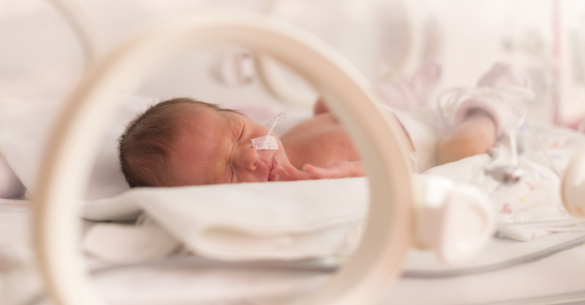 PReCePT started life as a West of England project five years ago. Today it is a powerful example of how we, as part of the AHSN Network, can rapidly put evidence into practice to improve healthcare for the nation.

Through PReCePT, women going into early labour under 30 weeks are offered magnesium sulphate, which helps to protect the babies’ brains. As a result fewer babies are likely to develop cerebral palsy, improving quality of life for both preterm babies and their families.

Born in the West Country

PReCePT was born in the West Country back in 2014. It all began with Dr Karen Luyt, a neonatologist at University Hospitals Bristol NHS Foundation Trust.

At the time, Karen knew there was strong evidence that giving mothers in preterm labour magnesium sulphate could help to guard against their babies developing cerebral palsy, but also knew that many maternity units were not offering eligible mothers the treatment. There were potentially lots of cases of babies being born with cerebral palsy that could have been easily prevented.

What Karen didn’t know was how to influence others to change their practice. That’s when an email popped into her inbox from the West of England AHSN. We were looking for projects of exactly this nature where we could enable others to put evidence into practice.

Karen’s proposal was successful, and we funded an improvement team to co-design a quality improvement (QI) approach with staff and parents, which was quickly adopted by all five maternity units in the West of England.

After just six months, all five maternity units had increased the administration of magnesium sulphate to eligible mothers from an average of 21% to 88%. Estimates show that this prevented around seven cases of cerebral palsy across the region, representing potential lifetime healthcare savings of around £5 million, not to mention the improvements to quality of life for those children and their families.

Since the initial project, PReCePT has gone from strength to strength. It was selected by NHS England as one of the AHSN Network’s seven national adoption and spread programmes for 2018-2020. This means PReCePT is the first ever perinatal programme delivered at scale across England, bringing together midwives, obstetricians and neonatologists in every maternity unit in the country.

Elly Salisbury received magnesium sulphate when she went into labour at just 27 weeks. Speaking about why she is such a passionate supporter of PReCePT she said: “Cormac has just turned five and he’s an amazing little boy, he has no signs of cerebral palsy at all. I truly believe that the magnesium sulphate was part of that.

“I think it’s incredible that across the country all mothers in my situation will be offered magnesium sulphate. It will make such a difference to thousands of babies, and that in itself is just so completely worth it.”

As part of this national programme each AHSN now has regional and clinical leads, as well as teams of midwives implementing the project. Together we’re aiming to ensure at least 85% of all eligible mothers across England are receiving magnesium sulphate by 2020, with a ‘stretch target’ of 95%.

Midwives across the country are getting to grips with the process and it has already shown fantastic results. In January the Thames Valley Region and Milton Keynes ensured 90% of eligible mothers received magnesium sulphate to protect their new-borns, while Cornwall achieved a staggering 100%.

The comprehensive PReCePT QI toolkit has been downloaded over 400 times right across the country. And in January we received backing from Tommy’s, a charity saving babies’ lives through research and the British Association of Perinatal Medicine.

PReCePT is also running in tandem with the PReCePT Study, a research trial nested within the national programme, funded by the Health Foundation. This aims to assess the effectiveness of two different quality improvement approaches in implementing the project across a subset of maternity units.

It’s what AHSNs do

PReCePT is a brilliant success story, but it’s also a great example of how the West of England AHSN works. We take a whole system approach to improving healthcare; we use evidence, innovation and quality improvement methods to make a difference nationally. And we’re always on the lookout for the next big thing…