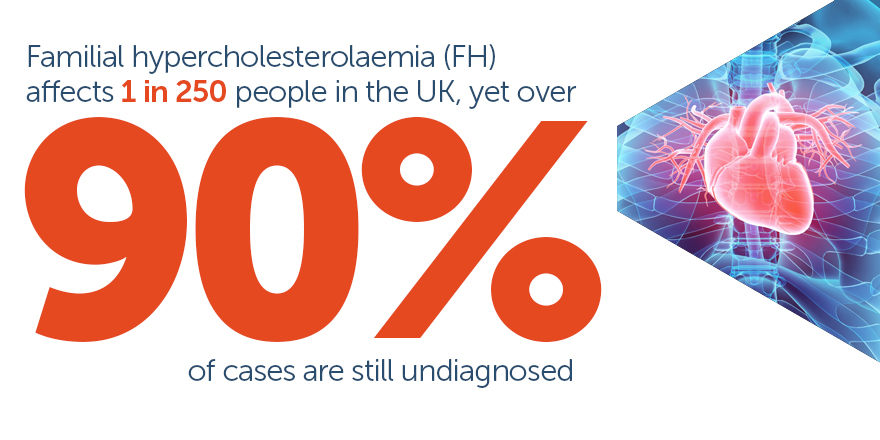 Thousands of toddlers will be screened for an inherited gene that can cause early heart disease as part of a new national pilot programme that includes the West of England region.

Over the next two years, 30,000 children across England will be assessed using a heel prick blood test to identify if they have a ‘faulty gene’ which causes familial hypercholesterolaemia (FH).

FH is an inherited condition passed down through families which can lead to extremely high cholesterol levels. It affects 1 in 250[1] people in the UK, yet over 90% of cases are still undiagnosed.

Without treatment, FH can lead to heart disease at a young age. Identifying affected individuals before the onset of disease is important because treatments can be put in place that promotes a healthy, active life and lowers blood cholesterol levels, all of which substantially reduce the risk of heart disease.

The Child-Parent Screening pilot programme, funded by NHS England and Improvement and delivered by the AHSN Network, will involve a number of GP practices across seven areas in England over the next two years.

If you are a GP or PCN in the West of England and would like to get involved in this programme please view our invitation and contact Clare Evans, Deputy Director of Service and System Transformation – clare.evans14@nhs.net or Rachel Gibbons, Senior Project Manager – rachel.gibbons10@nhs.net to discuss how we can work with you.

Parents will be offered the heel prick blood test during their child’s routine immunisation appointment, which usually happens between the age of one and two.

If they are identified as having high cholesterol, their parents are then offered testing which enables two generations to be tested at once.

Adults identified as having FH will receive statins immediately. Children will be started on a healthy diet from age one and offered statins from around age 10.

Rebecca McKenzie, a biology teacher from Cornwall, took part in an earlier research study, led by Professor David Wald, looking at the efficacy and feasibility of child-parent screening for FH in primary care practice, which led to eight members of her extended family being diagnosed with FH.

Her son, Harrison, who is now nine, was invited to have the heel prick blood test during his routine immunisation appointment which identified FH. As a result, Rebecca and her two daughters were also diagnosed. Further testing on her extended family identified Rebecca’s mother, brother and two nieces as also having the condition.

The two-year pilot programme will complete in 2023 and, following an evaluation, the aim is to roll the Child-Parent Screening service out across the other eight regions covered by the AHSNs.

The seven regions with GP practices taking part in the pilot programme alongside the West of England are North East and North Cumbria, North West, West Midlands, Oxford, North West London and East of England.

“FH is easily managed if identified early and treated but without treatment it can be a life-threatening condition.

We know that people who have the gene are significantly more likely to have a cardiovascular event before the age of 40 but if we start families on treatment early, the risk reduces back to the level of people without the gene. Equally, if a child has the gene, one in two of their first-degree relatives will have it as well, all you need to do is find one person and then you can track it through the family.

That’s why this new clinical service being piloted in our region, and six others in England, will screen two generations at once.

This is the first time a clinical FH service of this kind will be introduced in England and it has huge potential to increase detection of the condition; we need to find the 90% of people with FH who don’t realise they have the condition”.

Professor David Wald, Consultant Cardiologist at Barts Heart Centre and Chair of The Expert Advisory Group on FH at NHS England led the original research study demonstrating the feasibility and efficacy of child-parent screening for FH.

“The key to preventing premature heart attacks due to FH is early identification. Child-parent screening does this in a simple and acceptable way that benefits both child, parent and the wider family.

In our study most parents accepted the offer of testing their child for FH during the one year immunisation visit. They immediately saw the logic in preventing heart disease at the same time as infection in their child.

Child-parent screening brings together genetics and disease prevention in a general practice setting. It has the potential to prevent many thousands of heart attacks under the age of 50.”

“HEART UK is delighted to support this programme and help keep families together. HEART UK offers support to individuals and their families affected by FH and across the NHS to identify more people living with the condition. The earlier FH can be identified and treated the better. By identifying FH at very young age, children can grow up healthier by eating better and moving more and family members with the FH gene can get appropriate treatment.

Too few people know they have FH and we need to find more people to prevent the consequences that can often be avoided.”

To find out more about the Child-Parent Screening pilot, visit our FH webpage.