Looking forward to the next Regional Perinatal Equity Network event 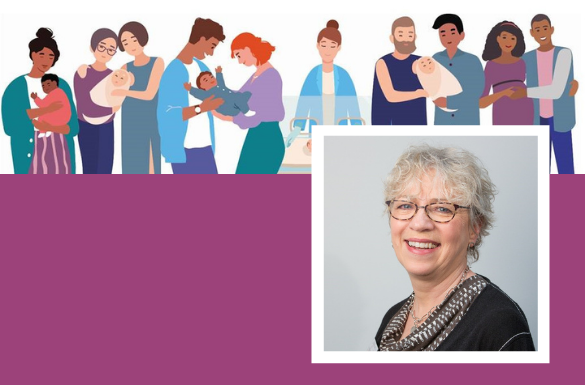 In this blog our Maternal and Neonatal Clinical Lead, Ann Remmers, looks forward to our next Regional Perinatal Equity Network event on 25 January 2022. Launched in July 2021 the network provides an opportunity for those working within maternity and newborn services, related organisations and parents or parent partners to come together across the West and South West of England to learn from each other and share experiences and ideas on how to ensure that equality in maternity and neonatal care is a priority.

Everyone should expect to have the same experience and outcome when giving birth. Sadly, we know this is not the case and yet again the latest MBRRACE report shows ‘a continued gap between the mortality rates for women from Black, Asian, mixed and white ethnic groups, with women from Black ethnic groups four times more likely to die than women from White groups.

Addressing inequality is an NHS priority, the maternity Equity and Equality Guidance for Local Maternity Systems was published in September 2021 to support Local Maternity and Neonatal Systems with the changes needed.

Learning from experiences where things have not gone well and how we can do things differently to make things better is key if we are truly going to make changes that will address all situations of discrimination and prejudice. At our previous meetings we have heard from those with personal experience of prejudice and those whose roles specifically drive and support change like the NHS Race and Health Observatory.  We have shared collectively our commitment and willingness to make positive change.

My commitment started with a personal journey; I wrote in a previous blog on inequalities in maternity care about my experience attending a Cultural Competency workshop and how it opened my eyes. Realising that I had previously seen inequality from a position of privilege gave me a new perspective on discrimination and prejudice, having never experienced it myself. I am continually learning about how I can positively influence the impact of inequality on people’s experience of maternity care.

Last October I was invited to speak at the RCM conference alongside the wonderful Dr Gloria Rowlands. Gloria gave an insightful presentation on the Turning the Tide report which explores the impact of prejudice and discrimination on staff from black and minority ethnic populations and their experiences.

Initially this research was going to be focussed on the impact of Covid on black and minority ethnic staff but soon widened to include all experiences because of the responses received. It also included the experiences of people using maternity services against a shocking background of statistics and poor outcomes. Gloria told a compelling story which demonstrated how our lack of understanding can lead to misconceptions.

Taking the time to find out about each other’s culture can have a positive impact on experiences and as the evidence tells us, outcomes. It seems such a simple thing to do and yet we don’t always do it. What happens is we conform with the group, finding it less hassle and more comfortable to agree with the majority than stand up and support the minority. However, the more we realise this and start to stand up to racism when we see it the more we will influence others to do the same and the greater opportunity we will have to stop racism and prejudice from preventing people from receiving the care they need and should expect.

In my talk I explored allyship. We can all make such a difference by becoming an anti-racist ally and calling out racism when we see it. Part of the change is learning about yourself; what influences you and your personal experience, my discovery was ‘Seeing and not Seeing’; opening up to seeing racism when previously I may not have seen it.  I have challenged myself to be an anti-racist ally. At times it may feel uncomfortable, but that’s ok. You may not always get it right but will be appreciated for trying. People would rather you apologise when you don’t get it right than not try at all.

We often don’t realise the power and influence we each hold. When we are at work other members of staff will see how you approach discrimination and will learn from you. Women will see and realise they can relax and feel confident that you understand. Black women have told me that they find it a constant battle to be the victim of racism. I am learning to be an ally and a champion because I believe it will have a positive impact and if we as a network can all learn how to be an ally, think of the difference we can collectively make. We can start to see those statistics change for the better.

Find out more and book for the next Regional Perinatal Equity Network on 25 January 2022.