Five things I learned at Expo 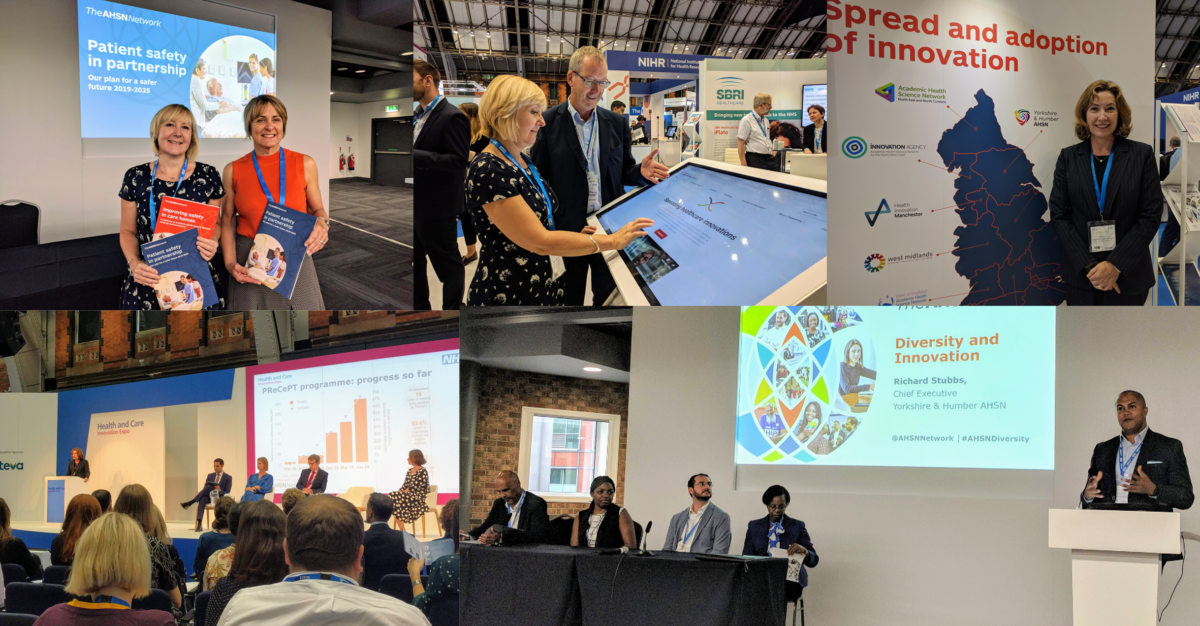 1. The AHSN Network is taking diversity and equality seriously

At Expo, Richard Stubbs, CEO at Yorkshire and Humber AHSN launched the AHSN Network’s Diversity in innovation report – a celebration of Black, Asian and Minority Ethnic (BAME) innovators and our pledges to do more.

The Network has made clear and decisive pledges to promote and deliver equality and diversity across the 15 organisations. These include very practical steps such as ensuring all staff undertake unconscious bias training by 2020; actively engaging and involving diverse communities and people from marginalised groups in our work; and appointing a person in each organisation with whom concerns about equality and diversity can be raised.

The report also includes lots of great stories from BAME innovators from across the Network, including two from the West of England – Seema Srivastava and Alan Bec.

2. Change is as much about feelings as it is about data

On the first day of Expo I went to a session led by the South West AHSN who were sharing what they’ve learned through Professor Trisha Greenhalgh and the Billions Institute in defining their approach to spread and adoption.

This is all about taking people along with you and not imposing changes on others without finding out what they want first. Spark change through making people feel something: data alone is rarely enough to change a system. Then when you are making progress, celebrate the changes through sharing stories as well as data.

3. The NHS understands the climate emergency as a healthcare challenge

On day two of Expo, Simon Stevens (Chief Executive of NHS England), Andy Burnham (Mayor of Greater Manchester) and Dame Jackie Daniel (Chief Executive of Newcastle upon Tyne Hospitals NHS Foundation Trust) led a brilliant panel discussion on ‘the climate change challenge – how can local government and the NHS work together to meet it’.

I learned that earlier this year Newcastle Hospitals became the first NHS trust in the UK to declare a climate emergency. The Trust has made a commitment to take action on the climate crisis, aiming to become carbon neutral by 2040.

In her talk, Dame Jackie talked about how climate breakdown is the greatest threat to population health and that it is everyone’s moral duty to take action. She has been actively encouraging staff to think creatively about reducing their department’s environmental impact, and is working with Newcastle City Council and other partners to help tackle this vast challenge.

4. PReCePT is a shining example of adoption and spread

PReCePT, one of the AHSN Network’s national programmes, seemed to be everywhere at Expo. PReCePT stands for the Prevention of Cerebral Palsy in PreTerm Labour. The programme is reducing the incidence of cerebral palsy by offering magnesium sulphate to all eligible women in England during preterm labour (less than 30 weeks).

Dr Karen Luyt, Clinical Lead on PReCePT talked about the fact that this is an intervention that has gone from one Trust to 149 Trusts in England over the course of a few years.

In one of her many presentations at Expo, Karen said: “If doctors believe in a treatment and you make it easy to implement, they’ll do it. After all, as clinicians we all want the best outcomes for our patients, so you just have to give them the opportunity to do so. Use facts and stories – tell the story of why it’s going to work and win hearts and minds”.

5. Collaboration is at the heart of adopting innovation

The AHSN Network is a key partner in the AAC, which brings together industry, government and the NHS in order to deliver the world-leading innovation that will be transformational for patient outcomes.

In this discussion Sam said: “Adopting innovation in the NHS is hard, but it’s not impossible. It involves collaboration at every part of the system – Government, NHS, general managers, clinicians. We’re all learning by doing.

“This is something where you have to change every part of the system, and get it to all work together. That isn’t necessarily a bad thing – we see it as an opportunity”.