Call the midwife: an AHSN special 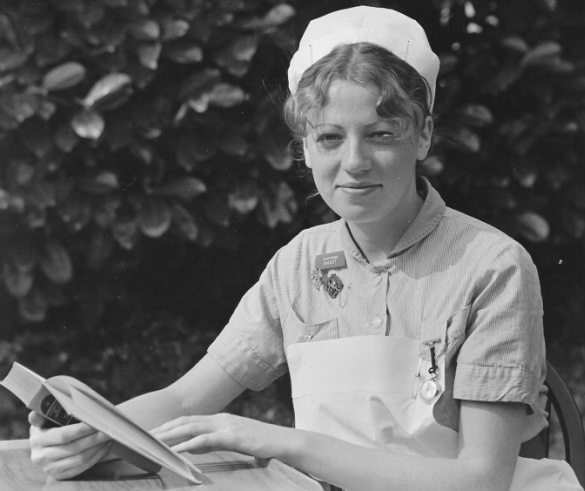 Ann Remmers, our Maternal and Neonatal Clinical Lead, looks back at a lifelong career in midwifery from bell bottoms to bed baths…

Celebrating the 70th birthday of the NHS in 2018 has led to me to reflect on my career in the NHS as it has done for so many people.

Thinking back to my first day in the NHS as a student nurse at Guy’s Hospital, it is hard to believe that I was an 18-year-old, fresh from school, setting out on a career that would span from the 70s to today.

Then the fashion was bell bottoms, hot pants and tank tops. Now it’s… Well, maybe it hasn’t changed that much!  If I had followed the family tradition set by my three brothers, I would have become a professional drummer. I am still curious to know whether drumming is in the genes and once I am fully retired I might try my hand…

I still clearly remember my first day in PTS – Preliminary Training School. I felt so proud to be there. (We weren’t considered safe to go on the wards until we had completed our six weeks’ PTS). The Director of Nursing told me she really wanted to make a Guys nurse of me.

There were two other things I remember her telling us on that day. Guy’s Hospital is near London Bridge and in those days it wasn’t the trendy, thriving area it is now. There was no Borough Market as we know it now; there were some fruit and vegetable stalls and a few pubs but it wasn’t the sort of area you would hang around in for long at night. She was very proud of the area we worked in and of her nurses. She told us, if we went to the market stalls in our uniforms we would be rewarded with a free bag of fruit because Guy’s nurses were so well respected and we didn’t even know about five-a-day then!

The second piece of advice I remember her giving us was that it was impossible to catch venereal disease from sitting on a toilet and that we should sit comfortably on any toilet seat confident that it was safe to do so. It sounds crazy now but truly there was a view at the time that it was possible to catch a sexually transmitted disease in this way. Wow, we all thought – too much more to learn about life!

Our six weeks’ PTS was filled with learning on how to care for patients before we were let loose on the wards. It was such a lot of fun and I made lifelong friends in that time. We learnt how to make a patient feel comfortable during long periods when they would be bedbound. I particularly remember the class on how to wash a patient’s hair in bed. It was pretty hilarious, with many near misses like the removal of bed heads almost rendering a colleague unconscious. But we did learn how to provide basic nursing care in a way that I have never forgotten.

We all lived in the nurse’s home at that time and, as it was the first time we had been away from home, there was much excitement about having a degree of freedom. Of course there were strict rules about having visitors to your room after 10 pm!

On night duty we took our breaks in the changing rooms on the ward and often used this time to support each other and share our experiences. As student nurses we had a lot of responsibility, especially on night duty when as a second and third year student we were often in charge of the ward. This was both exciting and terrifying! We really needed the support of each other to keep us going.

The most memorable Christmas Day was as a staff nurse on a medical ward. Once the patients had all been given their dinner, the table was set down the centre of the ward and the consultant carved the turkey. It does sound a bit Nonnatus House à la Call the Midwife, and at times I suppose it was. It did feel very much as though we were a family and it was great for team building.

After completing six months working as a staff nurse on a male medical ward, I decided to do my midwifery training in Bristol. It was very common at the time to undertake the one year midwifery course once we had qualified as a nurse.

Following a two-month break to travel around Canada and the USA, I moved from London to Bristol. I have to admit that when I first started my midwifery training it was a bit of a shock. After all the responsibility of running a medical ward, to be asked if I knew how to do a blood pressure…

To be honest I wasn’t sure if I liked midwifery in the beginning. Some of the midwives were positively scary! It was not until I was qualified as a midwife and had my own autonomy that I started to love it. This was the 1970s and some of the practice then was definitely not woman-centred. We have come a long way since those days when it was routine to do perineal shaves and give enemas when women went into labour. And if you came out of a room having admitted and examined a woman, you would be questioned as to why you had not artificially ruptured her membranes, and started electronic foetal heart monitoring.

It all sounds a bit horrific now and it is thanks to years of campaigning from women and passionate midwives that things have changed to the degree that they have.

I remember one particular busy night when I was a newly qualified midwife being asked to go out on the ‘Flying Squad’. This was the obstetric emergency team that could be called to deal with problems at home births or in one of the maternity homes. The team consisted of the on call obstetric registrar, a midwife and an anaesthetist from the maternity unit. We did not exactly fly but were taken in the Blood Transfusion car. We had to pick up the kit first and then the registrar and anaesthetist.

This particular night the call was to a woman at home who was giving birth to twins. By the time we arrived, the twins were born and were both healthy. I remember feeling quite elated – it was quite an adventure – only to be brought back down to earth when we got back to the hospital and told to go to the sluice and clean the scalp electrodes before going off duty. I was expecting a pat on the back or at least a thank you! That stuck with me and I vowed if I did stay in midwifery and got into a senior position I would always make sure that my staff felt valued.

Although we still need to be reminded to ensure that women are at the centre of their care, the Better Births Maternity Transformation programme has certainly put the focus on safe and personal care for women. We are also reminded about the importance of kindness to each other and to the women and families that we care for. If it had not been for the midwives who I saw displaying this kindness to others I don’t think I would have stayed in the profession.

I recently heard Suzette Woodward speak at the annual Royal College of Midwives conference about the importance of kindness and how it has a positive effect on safety, which really struck a chord with me. I think the time I enjoyed most was when, working as a community midwife, getting to know women and their families, being there to care for them in labour was always a bonus, and then to visit them at home after they had had their baby was joyous.

Continuity of carer is one of the recommendations of Better Births and is both an opportunity and a challenge for midwives. Providing continuity for women and ensuring midwives are able to have work life balance is key to achieving the right balance.

I have been very fortunate to have a lifelong career in midwifery; it has at times been stressful, tiring, joyful, demanding and rewarding.

My hope is that midwives in the future will be able to have the same positive experience that I have had and will be supported and cared for to enable them to in turn support and care for women.