Thinking outside the STP box 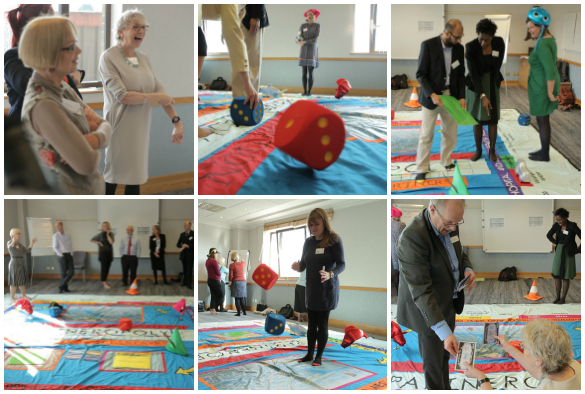 Our Patient and Public Involvement Manager, Hildegard Dumper looks back to our annual conference and the delights of playing Partneropoly…

If you happened to be walking through the corridors of the Swindon Hilton back in October, might have been surprised to find yourself in a room of shoeless health professionals screeching at each other in competitive excitement. You’d have seen the entire floor covered by a vast colourful quilt, which, when your eyes adjusted you would have recognised as rather like a Monopoly board.

This was the Partneropoly workshop at the West of England AHSN’s annual conference, which was given over to the theme of Sustainability and Transformation Partnerships (STPs) and brought together all those involved in delivering the three STPs in our area (Gloucestershire; Bristol, North Somerset & South Gloucestershire; and Bath, Swindon & Wiltshire).

The Partneropoly workshop was an interactive approach to getting the different stakeholders in the STPs to think ‘outside the box’ and see how they could share resources and expertise to make their plans more effective. Inspired by that well-known game Monopoly, Partneropoly was the brilliant brain child of Jan Cobbett at Bristol Health Partners, originally designed to encourage their Health Integration Teams to work more collaboratively across their ‘silos’.

In our workshops, we divided participants into teams based on their STP footprint. Each team could be made up of any combination of people from all kinds of organisations: commissioning, trusts, public contributors, industry, education, and voluntary sector. Just like in the traditional game, teams got to choose their playing piece – there was a boot, iron, top hat, car and so on – the only difference being these were huge! They threw the two massive dice and picked up their boot, iron, car or whatever and physically walked it around the board. Instead of landing on real estate like Mayfair, Oxford Street and the like, our teams landed on a possible partner organisation. This could be the AHSN, your local trust, clinical commission group, housing, police, education or just about any other potential partner. On picking a Chance card they’d be asked to think through how their STP might work with that specific stakeholder organisation on a specific area of work, such as equalities, patient safety or making better use of estates or workforce development.

I was fascinated to observe individuals being made to leap (in stockinged feet) well out of their comfort zone and interact with people they would not normally have reason to talk to. Then to top it all, they were actually having to listen to each other. I watched one group being dominated by two commissioners who were assuming they had to have all the answers. Eventually the penny dropped when they realised they had a valuable resource in their voluntary sector team member.

Afterwards, several people said it made them realise that there is a wide range of organisations out there that might play a meaningful role in delivering the vision of our STPs. Someone from a large trust told me they really had no idea there were so many organisations that could be working with. Those from industry said it had helped them understand what STPs are all about and how they could work more effectively with the health sector.

We are planning to use the game as a tool to get people from all disciplines interacting with each other. One of its next ‘outings’ will be with our Patient and Public Leads in the region to see how it can be of benefit to them.