How evidence-informed health can tackle the supply and demand gap 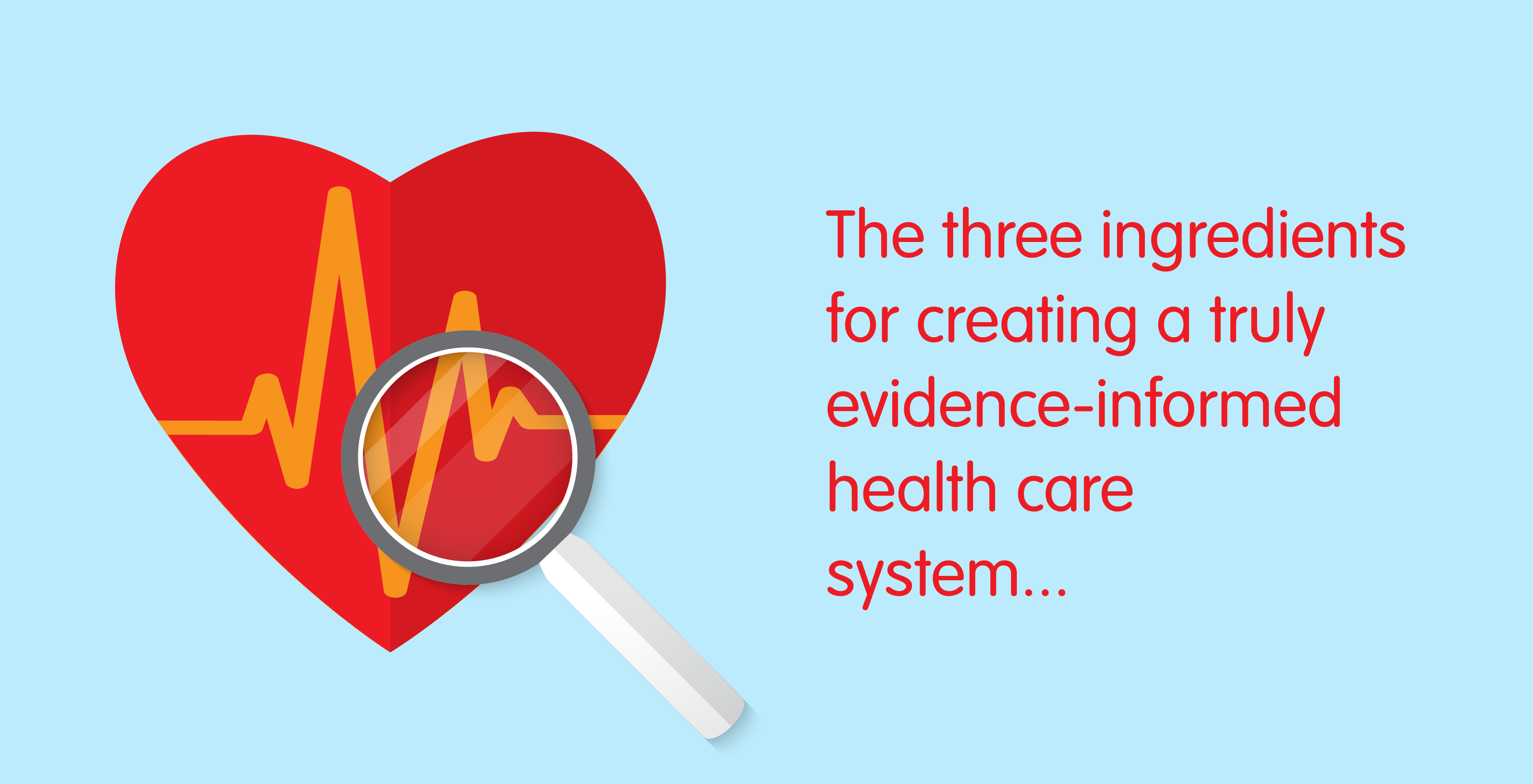 In this blog post, first published in the HSJ, Peter Brindle spells out three ingredients which can ensure that evidence – with all its money-saving potential – is incorporated into NHS practice…

The NHS should stand out as the most evidence-informed health system in the world. The worsening mismatch between the demand on the NHS and its resources of cash and staff mean we can’t afford not to have an evidence-informed approach to our health and care system.

This means making a deliberate and conscious effort to routinely look for and use the best available evidence before spending scarce resources on a new model of care or technology. And when the evidence is incomplete, which is most of the time, we need to commit to creating evidence through evaluating the change.

Having an evidence-informed approach makes sense. From a range of possible service designs, interventions or innovations, we will get better outcomes from those that have evidence of effectiveness compared to those that do not. Better outcomes mean spending less on the consequences of poor ones. Also having the evidence to hand makes it easier to defend stopping doing things that don’t work or that harm people.

“It is still not easy to create a truly evidence-informed system. One of the most potent reasons is the culture gap between the evidence producers and evidence users”

So how do we get the evidence informed approach into practice? The tens of thousands of NHS staff who have some management responsibility are the crucial link between the evidence and the beneficiaries – patients and the public. But while many people know this is the right approach, they find it hard to do. This we have to change and make the right way the easy way. Let’s consider three ingredients to making this happen:

Hardwire into the processes of normal business

Let’s get the paperwork right and make sure that business cases and priority-setting templates have sections asking about a balanced evidence appraisal and how the proposals are to be evaluated – and with what resource? Service specifications also need to be clear from the outset that potential providers must demonstrate an evidence-informed approach. Signing up to these 10 statements to improve decision-making in the commissioning of health services would be an excellent start.

But even with good leadership and willing teams, it is still not easy to create a truly evidence-informed system. There are many reasons for this, but perhaps one of the most potent is the culture gap between the evidence producers – primarily researchers – and the evidence users who commission and provide services. Researchers might be seen as being out of touch with current service priorities and pressures, and those working in the service are sometimes seen by researchers as having a disregard for their evidence.

There is also reluctance from those on the service side to take responsibility for creating their own evidence through a routine approach to service evaluation – they cannot always expect researchers and academia to produce the kind of evidence they need.

One way of tackling these issues is having people and teams who have a specific role in promoting better evidenced services and more impactful research and who can successfully cross the boundary between the service and research worlds. Some of the approaches we are using in the West of England include:

Health integration teams, which bring together patients, commissioners, providers, researchers and clinicians to tackle specific service related issues and in some cases become the main governance structure for a particular service area.

GP clinical evidence fellows are GPs seconded for one or two sessions per week into CCG leadership position to champion the use of evidence, conduct evidence appraisals and support an evidence informed business planning process. A similar programme has recently been launched in the North West of England.

NHS management fellows are commissioners who are seconded into a university research team and their colleagues, Researchers in Residence, are the reverse – researchers seconded to a CCG commissioning team. Their role is to act as translators between the academic and service environment, bringing their skills and knowledge from one environment to the other, identifying NHS-relevant research questions and promoting the co-production of high impact research.

Despite having the right leadership and organisational processes guiding staff to work in an evidence-informed way, knowledge and skills are still needed to make the right way the easy way. Training workshops based on practical toolkits can give the confidence to get started and signpost to existing but often under-used resources such as the library and knowledge services, public health, commissioning support units and regional CLAHRCs (Collaboration for Leadership in Applied Health Research and Care).

In a world of crushing timelines and the need for in-year savings, how do organisations create the financial and strategic space to develop an evidence informed approach – one that offers few quick fixes but longer term benefits? But then that’s the point: The less money and time there is, the greater the need for a culture that reduces the waste from initiating or continuing ineffective and harmful services and products.

By using just a tiny proportion of the health and care spend in a better evidenced and evaluated way, it would save millions. Now more than ever, there is too much at stake in the NHS to take anything other than an evidence-informed approach. We can’t afford not to.