How to make stuff happen… 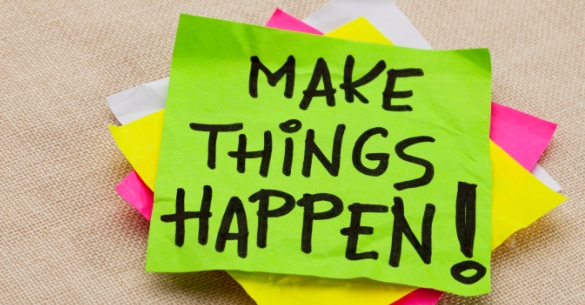 Today something interesting happened as I was cleaning out two filing cabinets that I had manage to completely fill with paper over the past seven to eight years.

I put everything into two piles, one to keep and one to shred and get rid of. The pile for shredding was pretty big, but so was the keep pile. After a vigorous bout of shredding and filling I sat down with a cup of tea and peering at the two mountains of paper sill left on the floor I wondered to myself, why on earth had I kept so many useless papers?

What was the difference between the stuff I was discarding and the stuff I wasn’t?  I realised that the stuff I was throwing away had been kept because at the time it felt like it was really important, or at least at that time was equally valuable to the stuff I’m still keeping.

This obviously holds the secret of all success; all I had to do is see which ideas worked out and which ones didn’t and could learn how to make more ideas work out more often.

So picking up the first folder from the reject pile I mused to myself, yeah well that was a pretty crazy idea, no wonder that didn’t work out. OK, let’s see what’s on top of my success pile. Hmm… actually that’s also a pretty zany idea but that was great success. So I picked another folder off the success pile: absolute no brainer, obvious why that idea worked out. Next, I picked one from the reject pile. OK, so why didn’t that one work out? It was an even better idea than the one I just looked at.

Astonishingly, I had to admit that with hindsight there was no difference between the two piles except that some things had worked out and some hadn’t!

Now this really bothered me  because it means I can’t control it and I can’t use any of the knowledge, but in the back of my mind was a nagging feeling that I had been here before.

In a former life I used to teach a course explaining entrepreneurship to scientists and the one thing they all had a real hard time grasping was the fact that success is not an equation, and it’s not exactly reproducible. You can take the same ingredients in a business proposition that worked last year and try and do it again the next year with the same people and it could fail.

If you think about it, were it to be exactly reproducible we’d all be rich and famous, but in reality stuff happens that we don’t control. One business I was involved with went out to raise funds the week before the markets crashed in 2008. We couldn’t have controlled that.

So the same is true of my two piles, the difference is that other stuff happened and got in the way of things so some ideas worked out and others didn’t. So what is this magical stuff that decides what works and what doesn’t. The things we just don’t control, well I guess it’s just Life.

I’d like to think I am getting better at spotting good ideas from bad ones but i’m still left with the rather stark conclusion that fundamentally the only way to make more successful stuff happen is actually to do more stuff.

But then again I guess I also want to have a life!

Posted on September 6, 2016 by Lars Sundstrom, Director of Enterprise, West of England AHSN