Just ask: “Could it be sepsis?” 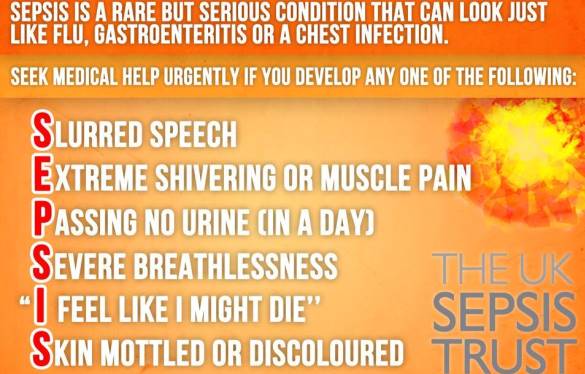 Over recent years, the awareness, detection, and prevention of sepsis has increasingly moved up the NHS agenda, and in 2015/16 the management of sepsis was made part of the Commission for Quality and Innovation (CQUIN) goal.

More recently the National Confidential Enquiry into Patient Outcome and Death (NCEPOD) released their  ‘Just Say Sepsis’ paper providing 21 recommendations for hospitals and primary care providers, and in light of this new information the National Institute of Health and Care Excellence (NICE) released new guidance on 14 July 2016, encouraging clinicians to consider sepsis early on with the same level of urgency as heart attacks.

Jeremy Hunt, Secretary of State for Health, subsequently met with UK Sepsis Trust Chief Executive, Dr Ron Daniels and mother Melissa Mead, whose son William died of sepsis in 2014, to announce that an awareness campaign would be launched to raise the profile of this devastating condition in the run up to World Sepsis Day on 13 September 2016.

We have been helping to raise awareness of sepsis across the West of England region through a series of sepsis masterclasses, as well as our Deteriorating Patient events.  In February 2016, we had the honor of Dr Ron Daniels speak at our Sepsis masterclass who was also joined by Susanna Morrish, a mother who lost her precious son Sam to sepsis in 2010.

Through these events we have helped lay a foundation for some great awareness work around sepsis by bringing together clinicians, patients, and healthcare staff from a wide variety of areas.  The topics covered have included the detection and management of sepsis across a range of settings including paediatrics, maternity, and community care, although we understand that more needs to be done.

Moving this forward locally is a regional sepsis group chaired by Dr Lesley Jordan at the Royal United Hospital in Bath, and on the 25 July 2016 they recently launched a 60 day campaign across our acute care providers to raise awareness of sepsis amongst staff and the general public.  The aim of this programme is to train over 3,000 staff in sepsis awareness and management across the West of England region using training sessions, training tools, presentations, and other promotional material. The idea is based upon the same model that the RUH used two years ago in which 700 members of staff were trained and made aware of sepsis, which led to the team’s awareness campaign being shortlisted at this year’s Patient Safety Care Awards.

The new NICE guidelines encourage clinicians to consider using an early warning score to assess people with suspected sepsis in acute hospital settings, and encourage primary and community care workers in cases where sepsis is suspected to make a definitive decision as to whether a patient should be referred to hospital or make a definitive diagnosis.  The link between implementing the sepsis six and using the early warning score has, therefore, been something that we have been exploring over the past year, and is something that we will be exploring further in September.

For our Deteriorating Patient event on 15 September 2016 in Bristol, we will be once again looking at many of these topics, including;

If you have been fortunate enough to secure yourself a place at this popular event, we look forward to seeing you there, alternatively look out for the 60 day sepsis awareness campaign taking place across our acute care providers.

Otherwise, here is a round-up of all the recently published guidance on sepsis: