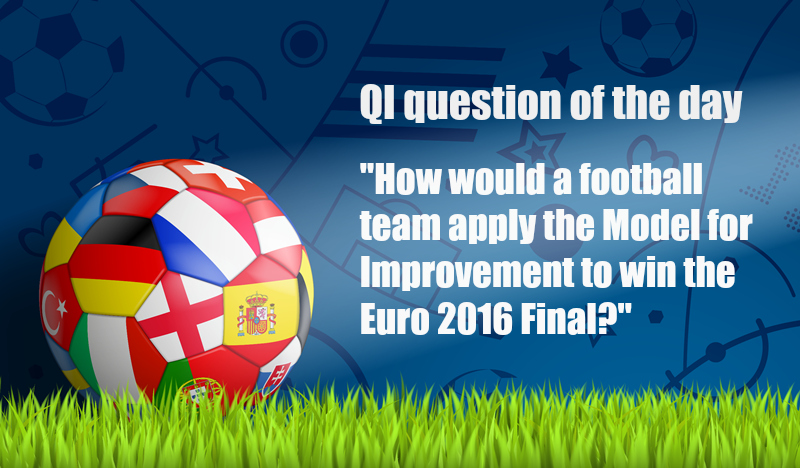 Natasha Owen, Quality Improvement Lead at the West of England AHSN, combines her passion for improvement science with her (basic) knowledge of football to get us in the mood for Euro 2016…

This year will see the Quality Improvement (QI) team at the West of England AHSN continue in its aim to increase the capacity and capability of colleagues in our member organisations, through the understanding and use of QI methodology and tools.

What better way to achieve this than by starting with our own teams here at the AHSN office?

Sometimes when using QI tools we have to step outside our own sector, in this case healthcare and the NHS, and develop people’s understanding of the concept using a more relatable topic. Say football for instance. The impending European Football Finals (Euro 2016) felt to us like the perfect opportunity to combine some office fun, in the form of a sweepstake, with an example of how to apply the Model for Improvement.

The QI team set about thinking: how would a football team apply the Model for Improvement to their tactical approach in the competition?

When specialist knowledge and QI skills are combined you can develop what Don Berwick called ‘the knowledge base for continual improvement’, which any team in any industry or field can strive for.

I mean who wants to stand still when you could improve?

As a QI expert or trainer, you are not expected to have the specialist knowledge. The key is allowing specialist teams to apply their knowledge to the Model.

In this case, I had the knowledge of applying the model combined with just enough football knowledge to make this example work!

The Model for Improvement requires a systematic approach to its application. It is a step by step process, which, when applied as described in the correct order, will provide a consistent approach to improving the quality of your performance, or processes, as a team.

Skipping a step, doing step three before step one, or taking steps out completely will not glean the same results. More importantly it is not guaranteed to achieve an improvement every time.

However the ‘test small and quick’ method allows you to rule out bad change ideas as easily as identifying ideas that create an improvement. Both outcomes are essential to promote continuous change.

So back to our football team… How on earth can a methodology created for a healthcare environment help a football team win the Euro 2016 Final?

Picture the scene. It is the month before the finals begin, the football season has ended, and Roy has called up the England boys to play for their country. What an honour!

During the football season all the players play for different teams, where different tactics and skills are used. Bringing them together in the short term is comparable to creating a Quality Improvement team. Roy does not have long to get this team to gel together to be a high quality goal scoring machine: the finals start on 10 June!

Training as a team gets underway. In other words, the planning of the QI project begins. Step One of the Model for Improvement is to establish your aim: what are we trying to accomplish?

For this team the aim is to win the European Football Tournament by 10 July 2016. Aims should be specific. Note that the team want/need to achieve their aim by a certain date.

The next thing they need to do is decide what data they could use to decide whether an improvement has been made. This is Step Two of the Model: how will we know a change is an improvement?

Measurement is key to distinguishing between a change, and a change that makes an improvement. If we don’t know what the data looks like beforehand, the data we collect afterwards will be meaningless.

A football team may have many sources of data they can measure, from the number of goals they score to how fast each player runs during a game. However they need to decide which measures are applicable to their aim. Does running faster contribute to winning? I don’t think it would be a team’s primary concern.

Before you decide what to change, you need to decide if it can be measured. So Roy and the boys have got together and had a discussion in the changing room and came up with the following measures…

Primary measure: number of points scored. Essentially this is how football is governed so that measure is set for the team. This might happen from time to time when undertaking improvement projects where measures are set externally – by CQC or NHS England for example.

Your primary measure is the main source of data you will use to establish if your aim has been achieved. Secondary measures can provide further data to indicate to what level a change is driving towards or away from making an improvement.

For example, where the team draws and only scores one point, this could be explained by the number of goals scored being equivalent to the opposing team, but an increase in yellow cards being given might suggest an underlying behavioural issue that led to a poorer performance, ultimately leading to the lack of goals scored or saved.

Now the fun begins! Step Three is all about getting creative: what changes will make an improvement? It’s all about generating ideas, no matter how crazy they might seem as long as they can be conducted within the rules of the game. I am pretty sure EUFA won’t allow players to wear rocket boosters on their shoes!

Finally we move into the testing phase. The team might decide what ideas to test using a prioritisation matrix. Remember, test one idea at a time. Test small, test quickly. This way you will limit the damage a change could cause and create less disruption in a full system which could have a ripple effect in other areas or departments.

This style of testing is called PDSA cycles (Plan-Do-Study-Act).

The team decide their first test of change will be: players will only pass the ball five times before whoever has the ball shoots for the goal during the game against Turkey on 22 May.

Do: put it into practice. The timescale for the test will be the duration of the next game (around 90 minutes).

Study. Using the measures you set out, has an improvement been made? Run charts are the recommended way to present and analyse your data to indicate improvement.

Act. Did you see an improvement? Yes? Try it again in the next match see if it continues to improve the team performance. No? Reflect on why it did not create an improvement and refine the idea, or scrap it and move on to the next idea.

Now you have this knowledge, you might want to give Roy and the England boys* a call to see if you can help them with their tactics and WIN WIN WIN!

*or any other manager and team in the tournament