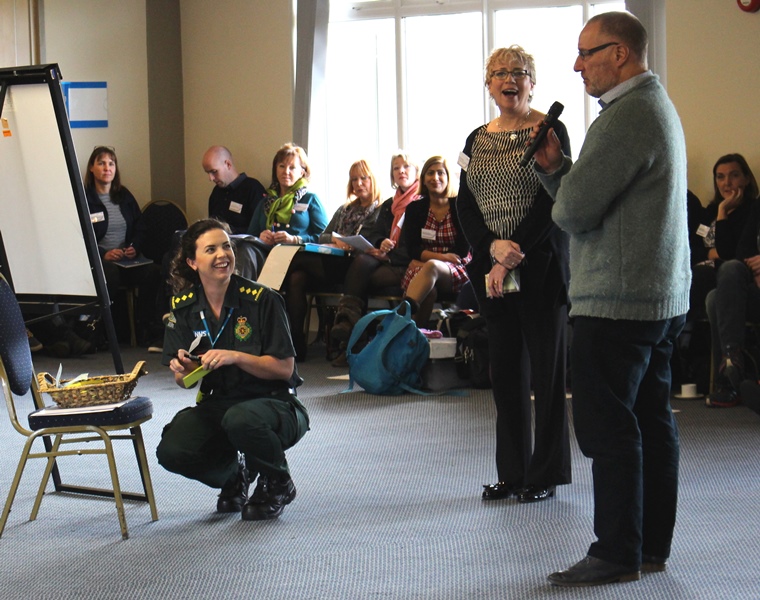 Ann Remmers, Patient Safety Programme Director for the West of England AHSN, reflects on using the Open Space technique to get people sharing knowledge and working together in new ways…

Now, this particular member of my team is renowned for coming up with good ideas and they are always worth listening to. However, after our initial enthusiasm had died down, we started to consider the reality and the enormity of what we would be taking on. Was it such a good idea after all…?

The main issue, and this was obviously quite an important one, was that we had never run an Open Space before. Between us, our only experience was that I had attended one, once. It was beginning to sound a bit like see one, do one…

Time for some serious research and what we discovered encouraged us.

Open Space is an ideal way to run an event when you want to ensure that everyone has an opportunity to contribute to the agenda – in real time, on the day.

When you bring together a large group of people who already have extensive knowledge and expertise in their field, Open Space enables all that expertise to be shared.

Sometimes, when an agenda for an event is planned in advance it can leave some people feeling that a particular issue or topic close to their heart was not covered. The idea with Open Space is that anyone attending can put forward the topic they wish to discuss: they agree to convene a group and then see who would like to join them. Once everyone who wishes to has had a chance to put forward their topics, people then get a chance to sign up to the groups they want to take part in.

The event we decided might work as an Open Space was our ‘Reducing the harm from falls: next steps’ event, which took place in March in Taunton.

We knew that the majority of the attendees, from across the health sector, including mental health, community, care homes and acute services, have great knowledge and experience to share, and a wide range of organisations were involved who likewise all had their own experiences and expertise.

People attending had been working hard on reducing harm from falls and had probably attended many meetings and events before. Evaluation from our last event showed that people wanted less time on presentations and more time on networking and sharing. In fact they told us they wanted more ‘coffee break’ time to network, and that is exactly what happens with Open Space.

Open Space is not for the faint hearted though.

One guide I read said that control freaks would find it especially difficult to facilitate as you have to live in the moment and see what happens as the day unfolds – that’s the scary bit!

Then there is standing in the middle of a circle with nearly 100 people around the room, some wondering what on earth is happening, while you hope that you are going to sell the idea enough for that first person to come forward.

I need not have worried though. These people were raring to go and had a lot they wanted to discuss and get out of the day. Soon I was surrounded by enthusiastic people all wanting to put themselves forward to convene a group. This is going well I thought, better than I could have expected! Right, what’s the next bit?!

Probably the next bit is best described as organised chaos. Or maybe just chaos. “What’s happening?” “Where do I go now?” “When’s coffee?” “I’ve lost Wales!” (Nathalie had the great idea of giving each group a rugby nation’s flag to identify their table. We were at Taunton Rugby Club after all).

The Open Space gurus tell you to expect a bit of mayhem at this point, as people sign up for groups. 100 people are a lot of people moving around a room looking at sign-up sheets and they do a lot of talking. We definitely thought of some ways we could improve in future, but amazingly everyone did get to a group and we were conscious of a real buzz in the room as people shared ideas and thoughts and came up with new ideas.

Overall I think we would count it as a success. We certainly had some very positive feedback from participants. There were some real enthusiasts who valued the opportunity to work together in this way, while there were also some who felt a bit uncomfortable with the perceived lack of order who would have preferred more structure.

Would we do it again? I think yes we would in the right circumstance. It is a fantastic way to achieve some really good connections and outcomes.

And I’m very glad to say that we did find Wales!

For more information on Open Space, take a look at this video.

Devoted and Disgruntled – A video guide from Improbable on Vimeo.

Posted on April 1, 2016 by Ann Remmers, Patient Safety Programme Director for the West of England AHSN